J/80 WORLD CHAMPIONSHIP IN GREAT BRITAIN Recently, the J/80 ‘Yacht Port Cartagena’, has returned from the world championship held in Dartmouth waters, after making a appreciatable championship where it obtained a 4th place in one of the races and classified in a considerable 7th place of the general at term of the three races held during the first day. Remarkable is the performance of the Spanish team in the championship as it has taken the first three places, with Olympic gold medallist Jose Maria Van der Ploeg, Rayco Tabares, and Carlos Martinez Murcia, on the podium. Emilio Azofra, the skipper of the yacht ‘Yacht Port Cartagena’, told us about ‘the interesting and rewarding experience’ having sailed a race course which is so different from those in the Region of Murcia, where the ream usually trains and races. 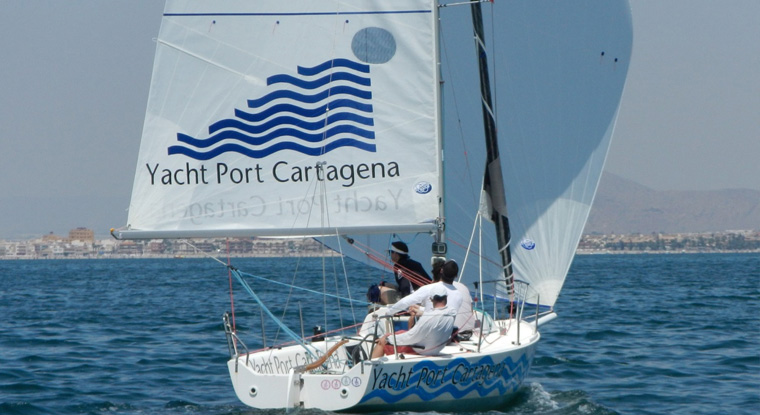 In this regard, he mentioned ‘how difficult it was for most of the participants to cope with winds in excess of 30 knots and with waves of four meters. Furthermore Emilio has anounced to participate in the next Championship in Spain which will be held in September this year – the famous ‘PalmaVela’ and ‘Copa del Rey’, and last not least to travel to Marseille in France, where the next World Championship of the J/80 class will be held. In this regard the collaboration, support and promotion of the sailing sport by the Yacht Port Cartagena is remarkable ever since its opening. Its intention and permanent focus to hoste a series of national and international events and races annually deserves great aknowlodgement.